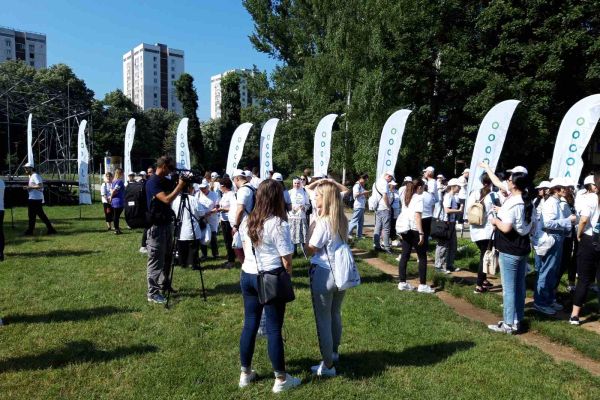 The action of cleaning/collecting packaging waste in the municipality of Novo Sarajevo, on Monday, officially marked the beginning of a new cycle of the project "From source to sea", organized by Coca-Cola in Bosnia and Herzegovina and with the support of partners.

This project that is a part of the global plan "World without waste", which aims to contribute in the most direct way to reduction of negative impact on the environment, with the aim of initiating and promoting education and raising public awareness about the importance of responsible packaging waste disposal.

As Vinko Kovačić, Public Affairs Manager for Sustainable Business and Communications at Coca-Cola Adria, explained for news agency Fena, this is a continuation of last year's cycle of activities, organized in seven B&H cities, in which more than 500 volunteers participated, and who collected more than five tons of waste.

- We are glad to have positive reactions, which enabled us not only to continue the project, but also to expand our cooperation with our partner 'Konzum' - said Kovačić.

He added that as part of this year's edition of the "From Source to Sea" project, in addition to Sarajevo, packaging waste collection campaigns will be organized in Banja Luka, Mostar and Zenica, after which overall activities will be completed again in the BiH capital.

He explained that cleaning actions, in addition to removing waste from the environment, are in the function of encouraging responsible disposal of packaging waste, and thus responsible behavior towards the protection of water resources so that the waste does not end up in rivers and seas.

- The idea is, in fact, to try to make a movement, which would in a period of two or three weeks, in some way mobilize the whole country and then the citizens would set aside some time and contribute with us to a common goal - said Kovačić.

The participants in the action, which starts in the municipality of Novo Sarajevo, were greeted by the mayor Hasan Tanović, emphasizing the importance of this project in the context of raising environmental awareness among citizens.

At the same time, he assessed the development of awareness of green policies, decarbonisation and environmental protection in general, starting from the family and educational institutions to the local community, as very important.

Tanović underlined the readiness of the Municipality to continue to support similar projects and activities, as well as to engage in environmental protection in accordance with its own plans and strategic commitments.

Lajla Žalić, PR manager of the Association "Ruke" and project "Let's Do It BiH", pointed out the importance of the project "From spring to sea", emphasizing that the latest cleaning action is a continuation of continuous activities involving members / volunteers and project team.

- The special importance of the project 'From source to sea' is that we separate waste and send the message that every waste is not garbage and that there is waste that can be recycled - she said.

The participants of today's action gathered in the park next to the National Museum of BiH (Stage park) and cleaning action starts along the Miljacka bank and Wilson's promenade, then continues towards Grbavica (residential part) and towards the Construction School and further near the Railway Station towards Velešići.

In addition to volunteers from non-governmental organizations, the event was attended by representatives of institutions, including the Environmental Protection Fund of the Federation of BiH.

Coca-Cola's partner in the realization of the project "From source to sea" is Konzum BiH and it is also supported by the companies Ekopak and  Euro Beta, which will take care of the collected packaging waste.