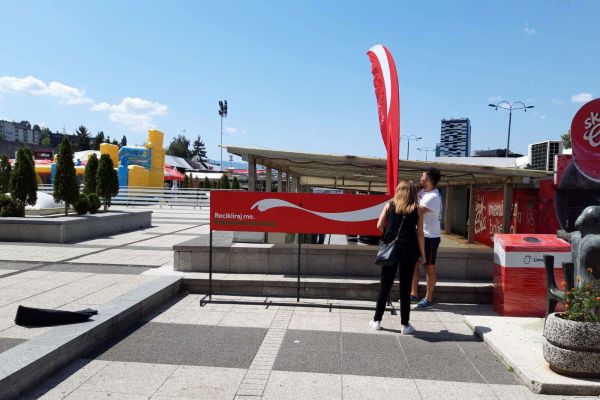 Ekopak participated in successfully implemented project of Coca-Cola and SFF “Recycle me. Give me a new life”

One of  "Ekopak" founders, company Coca-Cola HBC in cooperation with the Sarajevo Film Festival, Ekopak and PUC RAD, during the largest film festival in Southeast Europe "Sarajevo Film Festival" implemented the initiative "Recycle me. Give me a new life ", which is part of the global program "World without waste".

The activities within the initiative were aimed at creating new habits, educating and raising awareness of citizens about the importance of proper disposal, sorting and recycling of waste.

Containers for plastic bottles, cans and mixed waste were set up at the busiest locations in the center of Sarajevo and mobile teams were circulating around the city with backpacks for disposal of plastic bottles and cans. All collected waste, in cooperation with the utility company "Rad" and company "Ekopak" was sent for recycling.

Coca-Cola HBC as a socially responsible company and a leader in the application of the postulates of sustainable business has clear set of goals related to reducing environmental impact. One of the company's strategic commitments globally is the "World without Waste" program. This directly contributes to reducing the environmental impact and offers solutions to the challenges associated with packaging waste.

“We want to contribute to the reduction of environmental impact through cooperation with all our stakeholders. Therefore, already traditional partnership in Bosnia and Herzegovina with the Sarajevo Film Festival is opportunity for initiative “Recycle me. Give me a new life.”. We encourage citizens to have a responsible attitude towards packaging waste. At the same time, we promote sustainable and responsible business practices by reducing the environmental impact of the communities in which we operate” said Bruno Jelić, World Waste Free Project Manager at Coca-Cola HBC Adria.

“We were extremely honored to be part of this project and give support for initiative of our founder Coca-Cola HBC. In cooperation with colleagues from PUC RAD, Ekopak was in charge of setting up the infrastructure as well as collecting and transporting the collected packaging waste for recycling. The results were extraordinary and I hope that this year's Coca-Cola initiative will grow into the practice not only during SFF but as part of all major sport and cultural events in BiH" said Amela Hrbat, Managing Director of Ekopak.

In addition to Coca-Cola, its customers from the hospitality sector as well as Konzum and Mercator, are also participating in the initiative.