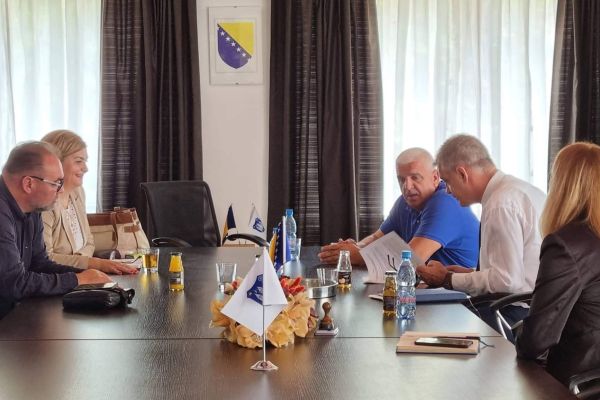 Ekopak has been successfully cooperating with JKP Komrad d.o.o. form Bihać since the beginning of its operational work and has a significant role in modernizing the operations of this utility company.

Successful cooperation continued in 2022, so on Wednesday 07/27/2022, in the City Administration Office of Bihać, a contract was signed on the procurement, installation and commissioning of the first underground containers for separate waste disposal in the city of Bihać.

The contract was signed between the City of Bihać, JKP Komrad d.o.o. Bihać and Ekopak and represents the continuation of the long-term cooperation that began in 2013, when the first contract was concluded on the establishment and development of the primary selection of packaging waste from solid municipal waste in the Municipality of Bihać.

The goal of this joint project is to reduce the number of existing open, above-ground containers in the inner city core, as well as to enable the selective disposal of waste in containers intended for separating paper, plastic packaging, glass and other household waste.

Ekopak will co-finance the procurement, installation and commissioning of an underground eco-island consisting of four special containers, three for recyclable materials (yellow for plastic, blue for paper, green for glass) and one black, for mixed municipal waste.

The value of the contract is about 80,000 KM and the implementation of the project should be completed in the next two months, after the purchase and the acquisition of the necessary documentation related to the installation.

The contract was signed on behalf of the City of Bihać by Mayor Šuhret Fazlić, in front of Ekopak by managing director Amela Hrbat and JKP Komrad d.o.o. Bihać director Mehura Selimović.

The meeting was also attended by one of the founders of Ekopak, the director of the Bihać Brewery, Edin Ibrahimpašić as well as Vildana Zulić from the Department for Strategic Planning and Project Management of the City of Bihać.

At the meeting, it was pointed out that the City of Bihać, in cooperation with its utility company, will continue activities aimed at establishing a sustainable waste management system.