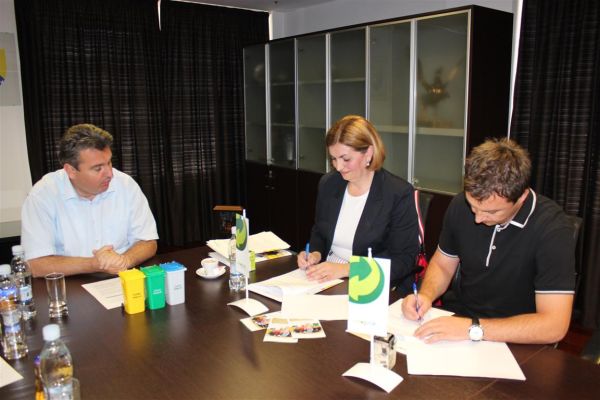 Today, in Bihać, in the Municipality Mayor's Cabinet, the official contract signing ceremony was organized sot that Ekopak and the public utility service company „Komrad“ from Bihać on launching the project  "Separate Packaging Waste Collection From Municipal Solid Waste In The Municipality Of Bihać".

The contract was signed by Amela Hrbat, director of Ekopak, and Hadis Jusić, director of Komrad from Bihać. Mr. Emdžad Galijašević, mayor of the municipality of Bihać, attended the contract signing. The project is supported by the Ministry of Construction, Space Management and Environmental Protection of the Unsko-Sanski Canton, with the minister Sinha Kurbegović on the head.

With the project „Separate Packaging Waste Collection From Municipal Solid Waste In The Municipality Of Bihać“, on the chosen micro-location - urban area of the Municipality, the wish is to stimulate the system of separate waste collection, sorting, balling and recycling in the FBiH. This would help get the necessary information according to which the project would be improved and spread to the rest of Bihać Municipality, other municipalities and cantons and in order to become the practice and the method of the packaging waste management in the future in the FBiH.

The project consists of two segments: technical and educational. The technical segment means the infrastructure preparation: setting the recycling yards in the center of the municipality and in schools, and yellow garbage bags for the primary selection as well as planning the sorting space and the final destinations for the collected waste so that the packaging waste would be recycled. The educational segment considers education of the populations about the importance of the separate waste disposal, with aspecial focus on children, school and preschool age.

Realization of the project on the Municipality of Bihać territory will be established the European model of packaging waste management according to the principle „extended producer's responsibility“ will secure the conditions for setting up a sustainable system on municipality solid waste management and create  the development of the environmental awareness.

It represents an opportunity for the Municipality of Bihać to build up an image of the leader in the FBiH when it comes to establishing the new ways of packaging waste management and an image of the modern city in every aspect of living in which environmental protection is a basic of the concept.