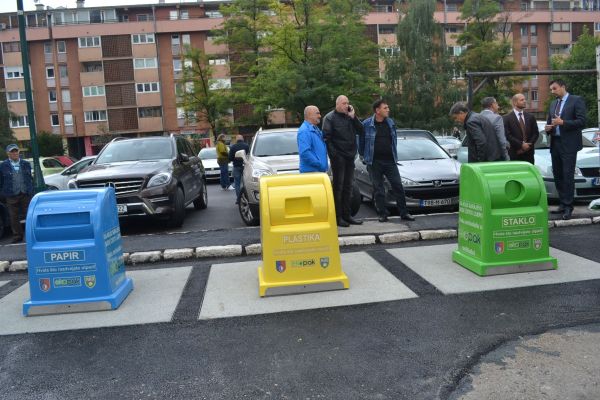 Sarajevo, 07.09.2016. - Today is performed the official handover of the first underground eco-island in the Sarajevo Canton, which is the beginning of a new approach in the waste management that is developing in the last 20 years in European countries.

"Development of primary selection of packaging waste from municipal solid waste in Canton Sarajevo" project jointly implement Ministry of municipal economy and infrastructure of the Sarajevo Canton, PUC "Rad" and "Ekopak" - authorized system operator of packaging and packaging waste management, in which it is planned to set up four underground eco-island in the Sarajevo Canton as well as procurement of special vehicles for emptying containers.

Procurement of 20 containers Czech manufacturer Reflex Zlín committed "Ekopak", whose value is 150.000 KM. Ministry of municipal economy and infrastructure will finance the purchase of commercial vehicle worth 200,000 KM, and PUC "Rad" Sarajevo will carry out the construction work for setting up an eco-island and regularly emptie containers and collected packaging waste prepared for recycling.

Each eco-island consists of four underground containers: blue for paper waste, yellow for plastic waste, green for glass waste, and black for the disposal of that part of municipal waste which can not be used. It is the most advanced technical solution for the separate disposal of packaging waste, what can be seen in many European cities and thus collected packaging waste will be prepared and transported to recycling.