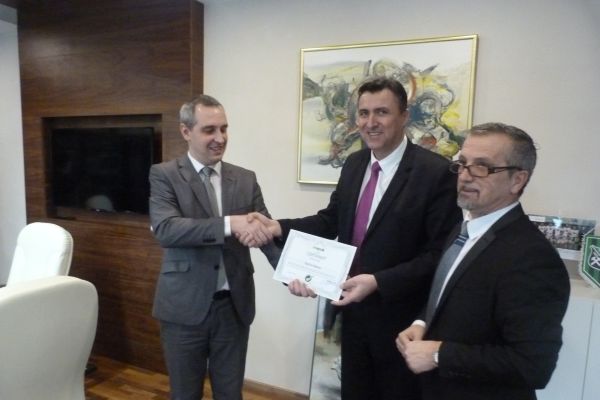 Ekopak will also provide  the purchase of sets of bins to 28 schools in the Municipality, so that all primary, secondary and teritorial schools will be covered. There are planed a various promotional and educational activities, and education of children about the importance of recycling of packaging waste. Educational play for children "Recycling is not a hassle“ will be played soon in Kakanj.

Municipality of Kakanj will determine the location for the eco-islands, and "Vodokom" will carry out the construction preparatory work. PU “Vodokom“ has committed to conduct regular emptying of packaging waste collected through eco-islands, and the preparation for transport and recycling.

After signing the contract, the representative of Ekopak Hasan Ahmetspahic handed to the Mayor of Kakanj Nermin Mandra certificate which officially announced the joining of Kakanj to the Green Dot system.

Kakanj is continuously working on increasing the level of communal hygiene. With eco-islands, Kakanj will soon get the underground containers. It is completed the acquisition of the two new trucks for waste disposal and acquisition of metilico, and it is significantly increased the volume of organized removal of waste from the area of ​​Kakanj.