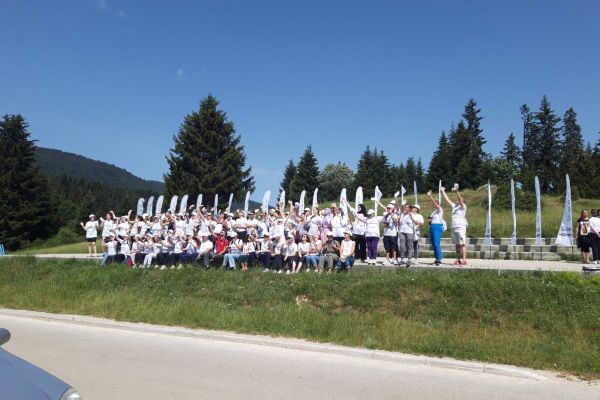 The cleaning action From the source to the sea was also supported by Ekopak, which was in charge of organizing the collection of waste. During five actions, more than 500 volunteers were engaged and more than five tons of waste were collected.

The last action of this year's edition of the From ource to sea project brought together more than a hundred volunteers in cleaning and separate collection of waste in Veliko polje on Igman. During the five cleaning actions in Sarajevo, Banja Luka, Mostar, Zenica and Igman, organized this year, more than five hundred volunteers of various generations joined together with Coca-Cola to achieve the common and global mission - a world without waste.

"I am happy that today I can greet more than a hundred volunteers on behalf of Coca-Cola in Bosnia and Herzegovina, at the fifth clean-up campaign, with which we end this year's edition of the project From source to sea in Bosnia and Herzegovina. This year, we are proud of the fact that through five cleaning actions we managed to gather more than 500 volunteers in Sarajevo, Banja Luka, Mostar and Zenica, who collected more than five tons of waste in less than a month" said Faruk Kovač, expert associate for corporate affairs and sustainability of Coca-Cola HBC Adria.

The realization of this year's project From source to sea began with the action of collecting packaging waste in Sarajevo - along Miljacka near Vilsonovo and towards Velešići. After that, Dr. Mladen Stojanović Park and the Suturije picnic area in Banja Luka, the Džemal Bijedić University campus in Mostar and lastly Kamberovića polje, along the Bosna River in Zenica, were cleaned. The action on Veliko polje on Igman was the finale of this year's edition of the project.

Coca-Cola in Bosnia and Herzegovina organized the actions in partnership with Konzuma in BiH, in cooperation with UG "Ruke", which is the carrier of the activities of the global initiative Lets do it in BiH and local non-governmental organizations active in the field of environmental protection.

The main goal of the From Source to Sea project is to encourage and promote education and strengthening of citizens' awareness of the importance of responsible disposal of packaging waste, and especially separate collection of waste that enables recycling. Last year, more than 500 volunteers took part in actions held in seven cities and municipalities where they collected more than five tons of packaging waste.

This year, Coca-Cola in Bosnia and Herzegovina also provided all volunteers with instructions and equipment needed for waste collection, and actions in local communities were coordinated by non-governmental organizations engaged in the field of environmental protection.

From the source to the sea is part of the long-term comprehensive plan World without waste, by which Coca-Cola has committed, among other things, that by 2030, it will collect and recycle the same amount of bottles and cans as it puts on the market, and that the share of recycled materials in the primary packaging will be at least 50 percent. By 2025, all primary packaging will be fully recyclable. Over the past 10 years, Coca-Cola has reduced the weight of the plastic bottles it produces in its plant by a total of 7%. An innovation in the production facility is a new type of plastic cap which, based on a 26% lighter weight, will contribute to reducing the use of plastic by almost 50 tons in 2022.

Coca-Cola in BiH stopped using plastic wrap and started using KeelClip™, an innovative minimalist cardboard packaging that can be fully recycled. KeelClip™ will be used on all packages of up to six cans of Coca-Cola, Coca-Cola Zero and Schweppes, and will then be extended to part of the rest of the range of non-alcoholic carbonated drinks that come to the market in cans.