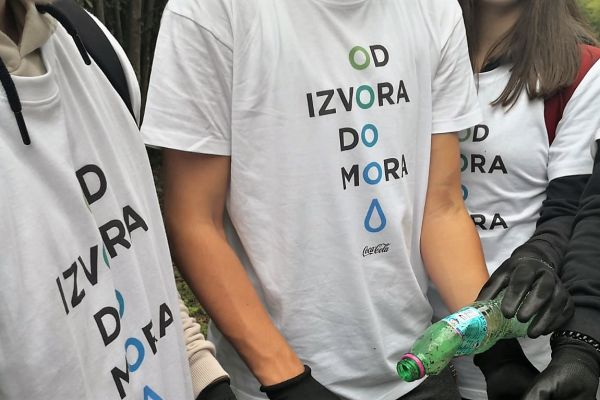 The action of cleaning packaging and other recyclable waste within the Coca-Cola project ''From spring to sea'' took place on the section along the road to Kulen Vakuf of Una National Park, City Park and the center of Bihać and engaged about a hundred participants.

This activity with the support of numerous partner institutions and organizations and with the coordination of UG Ruka, local community - City of Bihać, Ministry of Environmental Protection and Communal Services of the Una-Sana Canton Government included separate waste collection through the park, around the playground and along the Una riverbed and road belt.

One of the key components of ''From Source to Sea'' project is educational. Through work with participants and campaign with media partners it promotes the importance of responsible waste disposal as well as separation of waste into plastic packaging, paper and cans - which is recyclable waste.

This was the fourth action within the project that began on September 7 with the action of collecting packaging waste along the banks of the Drina River and through Višegrad, continued in Foča and Rudo. After today's action in Bihać, the project continues with actions in Tuzla on October 8, Tomislavgrad on October 15 and ends with action in Sarajevo on October 29.

Coca-Cola in Bosnia and Herzegovina as a socially responsible company and a leader in the implementation of the postulates of sustainable business, has clearly set goals related to reducing environmental impact. One of the strategic commitments of the company under global initiative - the World without Waste, includes the project From Source to Sea that is being implemented in Bosnia and Herzegovina for the first time this year.