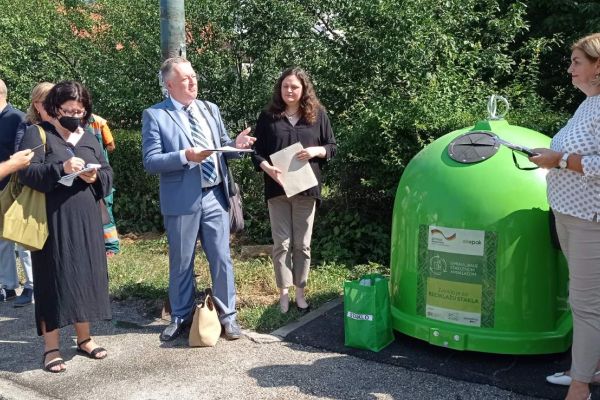 The project in the Municipality of Ilidža is implemented by: Municipality of Ilidža, the first operator of the packaging waste management system in Bosnia and Herzegovina "Ekopak", the Cantonal Public Utility Company (KJKP) "RAD", the Association for Economic Development (REDAH) and the German Organization for International Cooperation (GIZ).

"I am really glad that I was invited here today to attend the handover of glass packaging containers in the Municipality of Ilidža. I want to point out that Ilidža is one of the four municipalities working together on this project whose goal is to raise the rate of recycled glass by 20%, which leads to 200t of savings in terms of CO2 and it is an outstanding result. When we talk about bilateral cooperation between Germany and Bosnia and Herzegovina, there are two main points, namely environmental protection and climate change, and on the other hand support to economy" said Michaela Passlick, Head of the Department for Economic Cooperation at the German Embassy in BiH.

The beginning of the project in the Municipality of Ilidža was welcomed by Peter Wolf, Head of GIZ Open Regional Fund for Modernization of Municipal Services, who said: "This project refers to the creation of a system of added value or cost-effective glass recycling process implemented by three private companies from BiH (Ekopak), Serbia (Sekopak) and (Pakomak) from Northern Macedonia, three associations and twelve pilot municipalities that will simultaneously work to achieve objectives and improve in the field of waste management. "

Lamija Halilović, representative of the Municipality of Ilidža, emphasized that by signing the memorandum for participation in the project, her municipality committed to provide locations in public areas where containers for glass packaging will be placed and added that she hopes that after this project's s main goal will be achieved.

Vera Arnautović, director of Cantonal Public Utility Company "RAD" said that out of 50 delivered containers, 30 will be available to citizens while 20 containers will be distributed in hotels and restaurants.

"It is very important to mention that KJKP "Rad" provided a vehicle for emptying these containers. Recycling is very important for us because it is a long-term process and we need support from municipalities, institutions and citizens" said Aranutović.

Managing director of Ekopak, Amela Hrbat emphasized that three countries, twelve local communities, three system operators, GIZ, REDAH and utility companies are involved in this project with the aim of raising the glass recycling rate by 20%, so now the Municipality of Ilidža, KJKP Rad and Ekopak have to work on achieving that goal.

Ivica Sivrić, Director of REDAH, said that the function of REDAH within the project is the implementation of German government funds and stressed that the project is very complex in Bosnia and Herzegovina: "Now that the containers have been set up in all local communities, our goal is to monitor waste collection and transfer these good practices to other local communities in the Federation of Bosnia and Herzegovina."

The project "Management of glass packaging in the Western Balkans" is implemented within the development partnership program with the private sector (develoPPP) and is funded by the German Federal Ministry for Economic Cooperation and Development (BMZ), as well as the first operator of packaging waste management in Bosnia and Herzegovina "Ekopak", system operators "Sekopak" from Serbia and "Pakomak" from Northern Macedonia. This regional project will be implemented in Bosnia and Herzegovina in the City of Bihać and municipalities of Novi Travnik, Konjic and Ilidža.