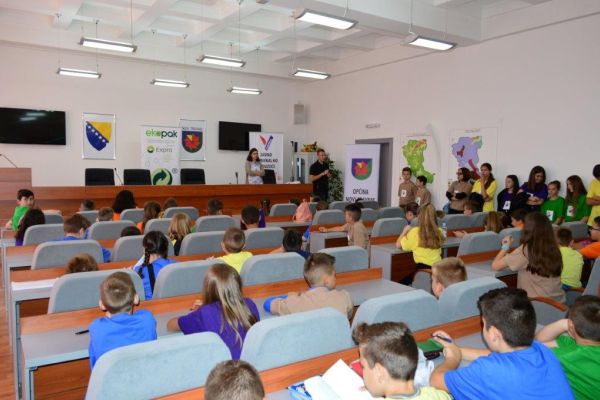 Today was held the final manifestation of the educational project "The Planet's smile is in your hands", in Municipality of Novi Travnik.

The project was jointly implemented by the Municipality of Novi Travnik, PUC "Vilenica Cistoca", Ekotim and Ekopak, it lasted for three months and it was carried out in all primary schools in this municipality.

More than 1,600 pupils participated in educational workshops. The tests of the acquired knowledge were followed in order to select the best pupils for the municipal competition which is organized today on 5 June - World Environment Day.

At today's event, around 70 children in Novi Travnik showed an enviable knowledge about the proper disposal and recycling of packaging waste, and the best among them were:

In this way, Ekopak continues to implement educational projects aimed at raising the awareness of citizens about the importance of separate disposal and recycling of packaging waste. Municipality of Novi Travnik and its Public Utility Company "Vilenica Cistoca" are in Ekopak's System and they significantly contribute to the fulfillment of the prescribed goals for the recycling of packaging waste. "Vilenica Cistoca" thus significantly reduces the amount of municipal waste that does not end up at the "Moscanica" landfill, but it is sent through the Ekopak's system to recycling process.